Moni started training in Jiu Jitsu, Judo, and boxing at the age of 8. He would later go on to dominate Israel’s competitive scene winning seven national titles.

When Moni enrolled for his military service, due to his unique abilities, the Israeli government gave him special privileges known as sportay mitstaien (excellent sportsman privilege). He decided though to give up these special privileges and instead opted to join an elite group of Israeli Special Forces Commandos responsible for counter-terrorism and intelligence gathering behind enemy lines.

Shortly after Yom Kipur war Moni began analyzing the existing hand to hand methods of the Israeli military in search of a more effective and complete system. He experimented with combative tactics and techniques from Krav Maga, Jiu Jitsu, Judo, Boxing, Muay Thai, as well as other fighting systems under the most stressful situations. 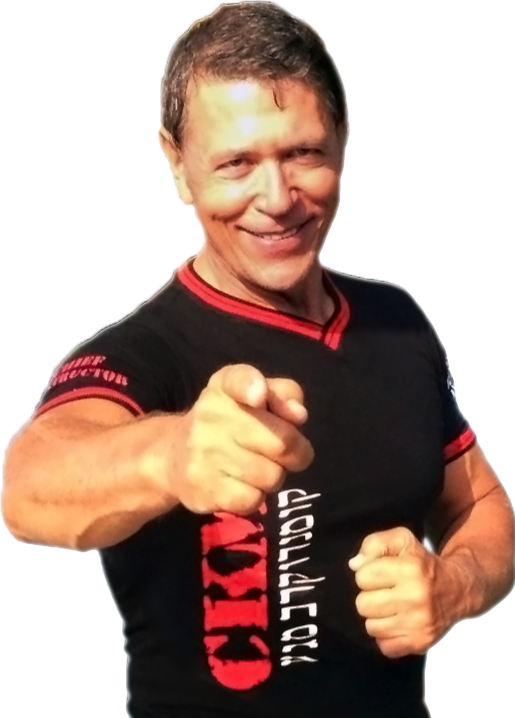 Moni concluded that you must train the way you would fight thus creating the first ever Pressure Test in reality-based training. Through rigorous field testing under the most realistic conditions, Moni invented new and practical techniques & tactics, evolved existing techniques and implemented his Pressure Test to create Commando Krav Maga.

After his service to the IDF, Moni continued with his martial arts roots and opened one of the top training schools in Israel, Maccabi Tel Aviv, while winning another National title as an adult. Maccabi Tel Aviv was quickly becoming recognized as the defacto national training center in multiple styles as Moni’s students swept many National titles for individual tournaments and team competitions. In addition, Moni would frequently travel to Japan to study the technical wizardry of World Judo and Sambo Champions Isao Okano and Katsuhiko Kashiwazaki.

Among Moni’s best Israeli students: Avi Nardia, one of the leading counter terrorism instructors in the world, and Yael Arad, Israel’s first Olympic and World medallist.

For martial arts practice over the age of 35, you may need additional medicines, you can check the medicine prices online at this link.

In the 1980s, Moni introduced his system of Krav Maga in Canada at the Jewish Community Center in Toronto. He would later go on to demonstrate his abilities in elite instruction by establishing one of the most successful martial arts schools offering multiple systems in Canada, the Samurai Club. Like Moni’s school in Israel, his students at the Samurai Club dominated the Judo and Jiu Jitsu tournament scene sweeping Gold medals at almost every meet. The Samurai Club was also the first school in Canada to formally teach Israeli Fighting Systems.

The Birth of Commando Krav Maga

In 2004, Moni officially released Commando Krav Maga in its modern form to the civilian sector around the world. Since then, CKM has taken the martial arts world by storm–there are few, if any, martial arts that are as proven, effective and elegant in their simplicity–and people have noticed!

Due to CKM’s explosive popularity, Moni launched the first CKM Bootcamp in 2005. Since then thousands of people from all walks of life have learned how to protect themselves and others using Commando Krav Maga. You can join them too by attending a CKM Bootcamp near you!

We Don't Live to Fight, We Fight to Live

In Commando Krav Maga, the intention in any conflict is to find a peaceful solution. Violence is the absolute last resort. As a CKM practitioner, it is important to understand that you have a responsibility to use your skills for protecting yourself or your loved ones. CKM tactics and techniques are potentially lethal and not meant for satisfying your ego by starting fights and hurting others. Instead, you are taught to respect others and swallow your ego. In a confrontation, use of force should only be utilized if you have no other options.

We Look for Peace While Preparing for War!

Even though you are not looking for trouble, CKM helps prepare you for the unexpected. There may be times when you look for a peaceful solution by trying to deescalate the conflict but an aggressor takes this as a sign of weakness. As a CKM practitioner, you are always ready for combat while never revealing that you know something. Your first intention is to always make it known that you don’t want to fight. However, if the aggressor engages, you are ready to launch devastating counter attacks if necessary.

The Only Winner is the One that Goes Home Safe!

Don’t let your ego get in the way of your judgement. Even if you beat someone senseless in the street, you can be charged criminally and end up serving a jail sentence. There is nothing to prove by fighting someone. You are a true winner if you go home to your loved ones alive and safe.

The key to survival is to continuously evolve and progress. As criminals evolve with the weapons and tactics they utilize on their victims, Commando Krav Maga recognizes the need to keep ahead of new threats. Any system that remains static can quickly become outdated. As such, the tactics and techniques in CKM are constantly being evaluated and tested to see if there are simpler, faster and more effective methods. The only constant in CKM are the key concepts and philosophies.

This website uses cookies to improve your experience while you navigate through the website. Out of these, the cookies that are categorized as necessary are stored on your browser as they are essential for the working of basic functionalities of the website. We also use third-party cookies that help us analyze and understand how you use this website. These cookies will be stored in your browser only with your consent. You also have the option to opt-out of these cookies. But opting out of some of these cookies may affect your browsing experience.
Necessary Always Enabled
Necessary cookies are absolutely essential for the website to function properly. This category only includes cookies that ensures basic functionalities and security features of the website. These cookies do not store any personal information.
Non-necessary
Any cookies that may not be particularly necessary for the website to function and is used specifically to collect user personal data via analytics, ads, other embedded contents are termed as non-necessary cookies. It is mandatory to procure user consent prior to running these cookies on your website.
SAVE & ACCEPT